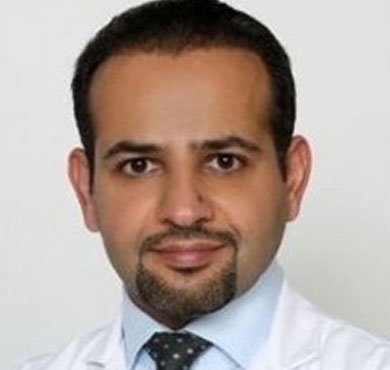 Dr Anwar AL Rabiah was born in Riyadh, kingdom of Saudi Arabia. He is married with four children . He is currently working in King Faisal Specialist Hospital and research centre as a Consultant in the department of orthopedics .
He lived in the United States 8 years of his childhood were he learned English fluently as he attended primary school in Texas .
Dr Alrabiah traveled back to Saudi Arabia were he continued his education and finished his medical school .
He then was sponsored by king Faisal specialist hospital to continue his postgraduate medical education in North America , first his residency at McMaster University , Hamilton Ontario Canada were he got after a 5 year program his FRCS C in orthopedic surgery.
Then he moved to the University of Toronto were he did his fellowship in joint replacement .
He then travelled to the University of Calgary were he joined the combined orthopedic neurosurgery spine fellowship program for two years , during his 8 years in Canada he received Merit Awards for Academic Achievements by the the Saudi Cultural Attaché in Ottowa for his years in Canada.
Since his return to king Faisal specialist hospital in Riyadh he has been very busy establishing the spine program for minimal invasive surgery he has mastered the lateral approach to spine being the number one centre for this type of surgery in the region , he has also been very busy with other spine pathology including adult scoliosis and metastatic spine tumors .
Since his return he has become one of the top spine surgeons in the country.
He believes that spine surgery in the future will be fully an outpatient procedure needing no blood transfusion or intensive care unit stays.
His experience in minimal invasive spine gave him an obligation to teach it in his fellowship program to future spine surgeons and also to local surgeons visiting his operating room on regular bases.
In spite of his busy work schedule, he made sure that he has time for his family wife and children.

How was your experience with Dr. Dr. Anwar Al Rabiah