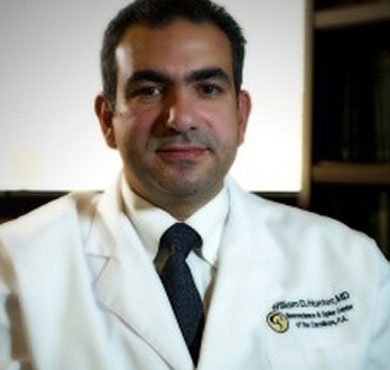 Dr. Hunter has been practicing Neurosurgery for over a decade. He has been involved with new and innovative techniques for spinal surgery throughout this time. Dr Hunter currently teaches minimally invasive spine techniques across the United States.

He received his undergraduate degree in Biology at Denison University in Ohio and then obtained a Masters Degree at Georgetown University in Washington, DC, in Physiology and Biophysics. On completion of his Masters he went to Georgetown Medical School, where he also completed his residency. Dr. Hunter then joined the University of Wisconsin, as an assistant professor where he trained neurosurgery residents and medical students in medical and surgical treatments of brain and spine diseases. Two years later, Dr. Hunter left the University of Wisconsin to pursue his carrier as a Spine surgeon in a private practice. He joined a group outside of Charlotte, North Carolina in 2000 and has been there since.

Dr. Hunter has been involved in the spinal program at Gaston Memorial Hospital since the beginning of his carrier and is considered as a leader for bringing new and innovative micro surgical techniques to the hospital and his patients. The hospital has recently been awarded top on the list for “Best Hospital’s in North Carolina”, with the spine program deemed as one of the best in the state.

Providing the best possible quality care to his patients is Dr. Hunter’s main concern. Although he runs a very busy private practice, he still makes sure that he finds the time to teach. His lectures and seminars usually revolve around new and innovative minimally invasive spine surgical techniques. He teaches spinal surgery at Duke University, where he travels on a regular basis and also teaches across the United States providing his expertise on spinal surgery. He is very passionate about what he does and always strives to deliver the best care to his patients. He has been board certified since 2001 with the American Board of Neurological Surgeons.

As a Greek-American, Dr. Hunter is particularly excited with his involvement with AIMIS, in Cyprus. His mother was born in Athens and still has family living there. His father’s family is from the small island of Mitilini, where he also has family. Dr. Hunter lived in Athens, Greece for a few years. He is married to his lovely wife Karen, for over 16 years, and has 2 boys.

Neuroscience and Spine of the Carolinas
Gastonia, North Carolina
Present

How was your experience with Dr. Dr. William Hunter